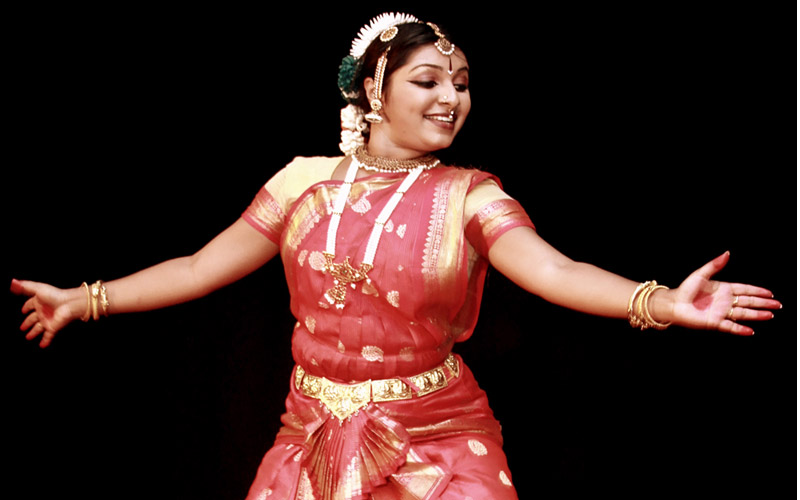 Commencing the recital with "Jaya Janaki Kantha," a Purandara Dasa kriti in Ragamalika and Talamalika singing the praise of lord Rama, Aishwarya went on to perform the main piece of the recital, a Swarajathi in ragam Useni, talam rupakam, a composition of the Tanjore Quartet, commencing with the lyrics "Ye mandayaa na raa na Swami niki ye mandu paetanu raa na Swami..." - what potion have you been given, dear Lord? The nayika laments that her lover has been administered a love potion by another woman and he has fallen for her. Aishwarya did a sanchari showing the heroine telling her lover that the other woman is fat, with protruding teeth and he has fallen for her under the influence of a love potion. The other sancharis elaborated on her lover being a courageous warrior who was also the heartthrob of many women. "Prema meeraga nanneru pilichithe ravani" - with love for your company I am requesting you to come to me, why don't you?

In the charanam line the lyrics run as follows, "Au lera ninne mayavanti vachi nijam palichu valachiti kata ra ippudu telisinura." The kanditha nayika says she has heard enough and is aware of the truth and asks him to go to the other woman. Aishwarya's abhinaya for "Prema meeraga" and "Au lera" were outstanding and the jathis which were interspersed were executed with absolute precision which drew repeated applause from the audience in Narada Gana Sabha hall.

Immediately following the Swarajathi was "Bhavayami Gopalabalam" in Yamuna Kalyani immortalised by the great MS Subbulakshmi. A bhakthi laden piece worshipping Gopala and referring to "Kathi ta tita mekhala kachita mani khantika"- the odhiyanam tied to the waist of young Gopala though veiled gives proof of its presence through the ringing bells sound. The devotee tells Gopala, "Please purify me with your young feet." Aishwarya, in this item brought Gopala before the eyes of the audience ultimately referring to Thiruvenkatachalam in Tirupathi.

She then took up Swati Thirunal's Brindavanasaranga composition "Chaliye Kunjanamo tum hum mil Shyam Hari." The gist of the song is, "Oh Shyam Hari, let us meet at the bower!" admiring the beauty of the Yamuna river and the mellifluous voice of the cuckoo bird. Aishwarya brought the spirit of Swati Thirunal's kriti abundantly before the audience with her meaningful abhinayam. The fitting finale was a thillana in ragam Hindolam, a composition of Madurai N Krishnan in adi talam in praise of Raja Rajeshwari. From the attami which was seen at the beginning of the thillana, the various nadais were brilliantly executed by Aishwarya. She will go places with more opportunities coming her way being under the tutelage of a leading guru like Prof Sudharani Raghupathy and ably mentored by Priya Murle. She will be an artiste to watch out for in the years to come.