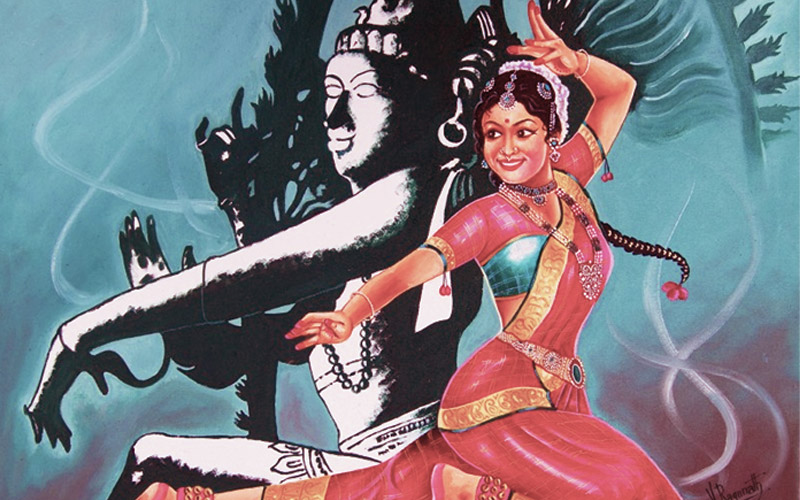 The theoretical foundations of Bharatanatyam are found in Natya Shastra, the ancient Hindu text of performance arts.

Natya Shastra is attributed to the ancient scholar Bharata Muni, and its first complete compilation is dated to between 200 BCE and 200 CE, but estimates vary between 500 BCE and 500 CE. The most studied version of the Natya Shastra text consists of about 6000 verses structured
into 36 chapters. The text, states Natalia Lidova, describes the theory of Tāṇḍava dance (Shiva), the theory of rasa, of bhāva, expression, gestures, acting techniques, basic steps, standing postures – all of which are part of Indian classical dances. Dance and performance arts, states this ancient text, are a form of expression of spiritual ideas, virtues and the essence of scriptures.

More direct historical references to Bharatnatyam is found in the Tamil epics Silappatikaram (~2nd century CE) and Manimegalai (~6th century). The ancient text Silappatikaram, includes a story of a dancing girl named Madhavi; it describes the dance training regimen called Arangatrau Kathai of Madhavi in verses 113 through 159. The carvings in Kanchipuram's Shiva temple that have been dated to 6th to 9th century CE suggest Bharatanatyam was a well developed performance art by about the mid 1st millennium CE.

A famous example of illustrative sculpture is in the southern gateway of the Chidambaram temple (~12th century) dedicated to Hindu god Shiva, where 108 poses of the Bharatnatyam, that are also described as karanas in the Natya Shastra, are carved in stone.

Many of the ancient Shiva sculptures in Hindu temples are same as the Bharata Natyam dance poses. For example, the Cave 1 of Badami cave temples, dated to 7th-century, portrays the Tandava-dancing Shiva as Nataraja. The image, 5 feet (1.5 m) tall, has 18 arms in a form that expresses the dance positions arranged in a geometric pattern. The arms of Shiva express mudras (symbolic hand gestures), that are found in Bharatanatyam.